On the 14th and 15th January every year India celebrates the end of the Winter and the coming of Spring –  giving thanks that the sun is back and harvest season is approaching.   In many cities in the region of Gujarat, the Uttarayan is a huge celebration and public holiday during which thousands of kites fill the air, flown from every roof-top   –  marking the connection between Heaven and Earth.  Along the joy of flying kites there are Fighting Kites, with competitions to see which is the last kite flying.   Kites that are ‘cut’ free from their strings are then chased across the countryside – usually by children – the prize being, that the first to reach it  –  can keep it !!   If you’ve seen the film ‘The Kite Runner’ or read the book, you’ll already know what goes on.

However, with so many kites flying over head, it is sadly also a time when thousands of migrating birds get caught up in the kite strings  –  either whilst they are being flown, or entangled in the loose strings of those kites that have been grounded.  This situation being made worse by the fact that many of the ‘fighting’ kites have strings (called manja)  which are not only very strong and almost unbreakable  –  but are then coated in ground-glass in order to cut down their opponents  –  therefore, as can be imagined, the injuries are horrendous.    Whilst the majority of the injuries are sustained by birds, humans and animals can run foul of these strings  –  causing untold tissue damage and in some cases even death.

Even now there are still hundreds of kites stranded in tree tops, on roof tops, wound round aerials and telephone wires or snared on buildings  –  left to flap in the breeze.   The following article appeared in a local newspaper whilst I was there, reporting that in the State of Gujarat had already collected an incredible 13 Tons  (Yes, you read that correctly  –  13 TONS) of kite string  !! 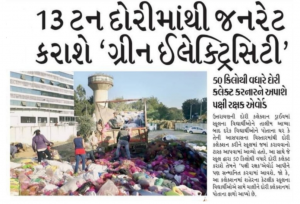 Arriving at the JCT Animal Hospital a week after the Festival had ended, the numbers of birds being admitted were slowing, however there were still hundreds to be treated….

Pigeons were the predominant casualties  –  due to the fact that they are regularly fed by the city dwellers and therefore flock en-mass over the city  –  with the next species to be caught-up in great numbers being (ironically) Kites  –  logical really, because where you have thousands of Pigeons you are going to have hundreds of Kites….

In reality, however, no species of bird were immune to the possibility of becoming entangled and injured.   In the end I did not treat one single Pigeon –  they were attended to by the troops of 4th year Vet students who give up their time to come and help-out over the Festival period  –  but, in fact, during my time at the JCT Animal Hospital 19 different species of bird received Laser treatment  –  from Peacock, Pelican, Flamingo, Heron, Crane, Stork, Ibis, Cormorant, Egret, Comb Duck, Ruddy Duck, Common Teal, Thick-knee, Godwit and Budgerigar, up to raptors such as Eagle, Barn Owl, Peregrine and of course many, many Kites.

The most common injury was a Patagial Laceration  –  the Patagial tendon runs from the shoulder to the carpo-metacarpal joint, or ‘wrist’, and makes up the leading edge of the wing  ….  without which the bird simply cannot fly. 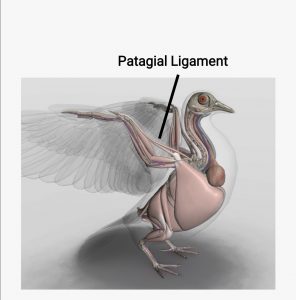 In some instances the impact onto this tendon was so great that the string went on to fracture the radius, or in extreme cases both radius and ulnar.  Not only a debilitating injury in itself, but compounded by the fact that bird ’tissue’ dries up very, very quickly  –  much more so than in animals  –  and certainly not helped by the heat.

Speed, therefore, was of the essence and is where Laser Therapy helped enormously  –  not only in encouraging healing, but in keeping tissue viable whilst that healing process was happening  –  the pace of work was intense, dawn ’til dusk 7 days a week,  with almost 220 Laser treatments given during the three weeks.   Hectic, Yes, but equally satisfying to know that not all the birds that came in were destined to live out the rest of their lives on the ground….

As said before, it was a week after the Festival and the pace of work was still hectic in order to keep on top of the admitted casualties  –  all of which are weighed, registered and numbered.  However, during the Festival itself the situation is apparently even more frantic  –   this year, working with an international team of volunteer vets from Brazil, USA and Belgium, who had flown in especially for the event, along side the many resident vets who work year-round with the Charity  –   there were nights when they didn’t finish until 1-2am, only to rise and start all over again the next day. 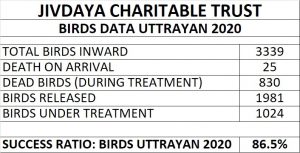 These are the official results released on 7th February  –  a mere two weeks after the Festival itself  –  and, as you can see, there were over 1000 birds still receiving treatment  !!

Next year the intention is to go out just before the Festival starts, hopefully with a colleague, to see if together we can improve the recovery rate further by treating much earlier  –  preferably on admission or immediately post surgery.

Fingers crossed and Watch this space ……   !! 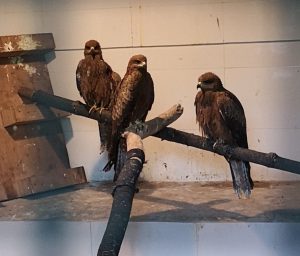