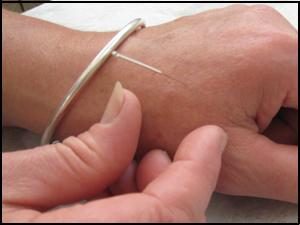 Traditional Acupuncture :  there is a sensation associated with needles, call ‘De Qi’, like a tug or pinch under the skin but which lasts only a few seconds  –  it is completely unlike that normally associated with being injected with a hypodermic, or being stabbed by an ordinary sowing needle !!

Laser Acupuncture and Laser Therapy :  have no sensation and are therefore safe and gentle to use on children, animals, the sensitive, the nervous or the elderly

How many treatments does it take?
Frequency of treatment largely depends on the condition being treated.

As a general rule acute conditions would be treated more often, say once or twice a week;

whilst chronic conditions may initially be treated weekly, with the interval time gradually

being extended to reflect the easing of symptoms. 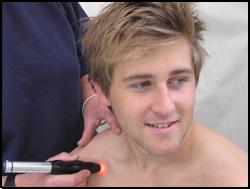 In all cases the objective is to gradually lengthen the period between treatments.  This is always assessed on an individual basis in accordance with age, state of health, the condition being treated and general response to treatment.

How soon after treatment can work/sport be resumed ?

This is a question often asked  –  particularly of sports men and women !!

The answer applies equally to humans and animals  …  preferably work/sport should be undertaken before a treatment, rather than after.

Dependent upon the condition being treated, light exercise may be undertaken the next day, but it is advisable to allow 24 hours to consolidate a treatment before resuming  work/activities. 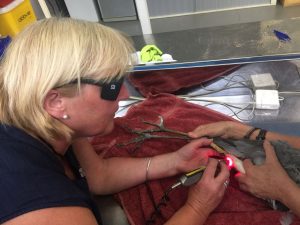 How do animals react to Laser Treatment?

On the whole, as with humans, animals respond very quickly and positively.

During treatment they may be seen to chew, lick, sigh, yawn or stretch – all good signs.
After treatment they may appear much calmer and ‘chilled’ – dogs in particular often have a deep sleep post treatment and horses can be seen to relax with eyes closed and lower lip soft and loose. Just occasionally their symptoms may appear to temporarily worsen, however this situation generally settles with 24 hours

Do the animals feel anything?
Generally animals are aware that something is happening to them and by watching you may notice they turn their ear/head towards you, or they may lean into the treatment.  Just occasionally a hyper-sensitive animal may react as if they were being tickled by a fly, in which case their skin might ‘creep’ or their tail swish, but as a general rule they find it a pleasant and relaxing experience.

Veterinary permission is sought prior to any animal treatment